Sweden – Impressive impact of the Year of the Outdoor recreation 2021. An inspiring example! 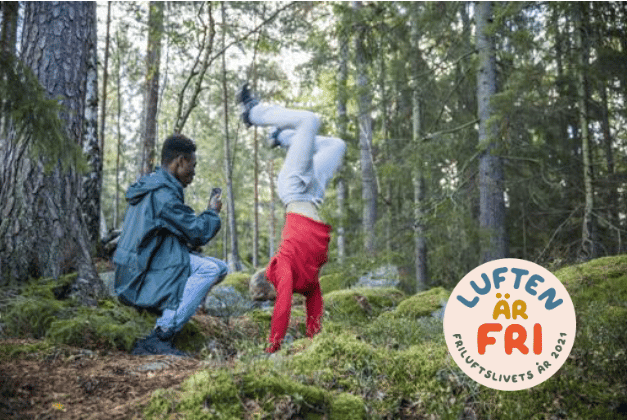 The Year of Outdoor Recreation 2021 was a national campaign run by the Swedish Association of Outdoor Organisations to promote outdoor recreation, improve collaboration between stakeholders and to increase awareness. Other goals were to increase knowledge about the public rights to access land and to spread information on the benefits to society of outdoor recreation. The project was initiated by the Environmental Protection Agency in Sweden, and named ”The air is free” (Swedish: Luften är fri). It was based on digital communication, collaboration between traditional and new organisations to promote outdoor recreation and to strengthen the work and policy regarding outdoor recreation in Sweden. The project also aimed at promoting the ten national policy goals for outdoor recreation. The campaign collaborated with a large number of stakeholders during the year, e.g., non-profit organisations, municipalities, county administrative boards, companies, foundations, social media influencers.

Overall, the project achieved the set goals although the pandemic entailed some changes and time shifts. In addition, stakeholders were generally very satisfied with the project and collaboration between organisations and stakeholders strengthened during the year. Efforts and activities were carried out throughout the country and throughout the year, many of which followed the project’s monthly themes. Stakeholders have also contributed with suggestions on how future campaigns and work can be improved and strengthened. The review of the grant projects also showed that they generally reached their target groups, reported positive results and managed to carry out planned activities despite the ongoing pandemic and restrictions. Many projects will happily live on. The projects also contributed with good examples that are important for future outdoor work and public health work through outdoor life.

Some of the most prominent results of the project are that the number of media articles on outdoor recreation increased sharply (25% at the end of the year; in November the increase was 36%), collaboration with over 360 stakeholders, posts in social media exceeded 100,000, and that over 500 decision-makers are estimated to have participated. The 71 grant projects had 122,000 participants during the year. A large number of “new” organisations contributed carried out activities throughout Sweden, a majority of which focused on relatively inexperienced groups. The stakeholders have reported 3,500 activities reaching a total of 350,000 people. The ”County Governor’s outdoor relay” (Swedish: Landshövdingestafetten) in January was important in order to reach decision-makers and politicians and gave the project a good start. The interviews with selected stakeholders indicate that the project’s approach has been successful with a positive image in communication, packaging of scientific messages and free materials and documentation. The evaluation also identified the importance of making the entire outdoor movement visible and included.

”I’ve got very positive experiences from the year. It’s been nice to see different organisations and stakeholders join forces and ”build bridges” together. It created a common positive spirit and put outdoor recreation on the political agenda like never before. You also improved your understanding of other people’s work. You learnt a lot from others, especially from the work of ”new” organisations.”

”The project has given us and outdoor recreation so much! All the groups talking about the relevant issues and all the invitations to important dialogues. This would never have happened without the year!”

”It was good timing because the pandemic made us think about how to promote the outdoors to the public. Then the campaign was launched and provided extra fuel to that work. When you guys made all those activities and united all the organisations…it was very powerful. We reached very far and many stakeholders joined in”

In what way the campaign has achieved the long-term goals is difficult to assess as the pandemic meant a substantial increase in outdoor life and increased interest in the issue at virtually all levels of Swedish society. The project argues that the year contributed to the goal of raising outdoor life in the public debate and to promote understanding of natural and cultural values. More difficult is to assess the impact on people’s physical and mental health and on employment in nature-based tourism.

This project has shown the need for increased collaboration between stakeholders involved in outdoor life.  The campaign has addressed and worked to promote the ten outdoor policy goals of Sweden and increased the social and political debate on outdoor life. Together, so much is possible!