“Towards a Green and Sustainable Deal for Sport”: Review of a successful conference at the European Parliament in Strasbourg 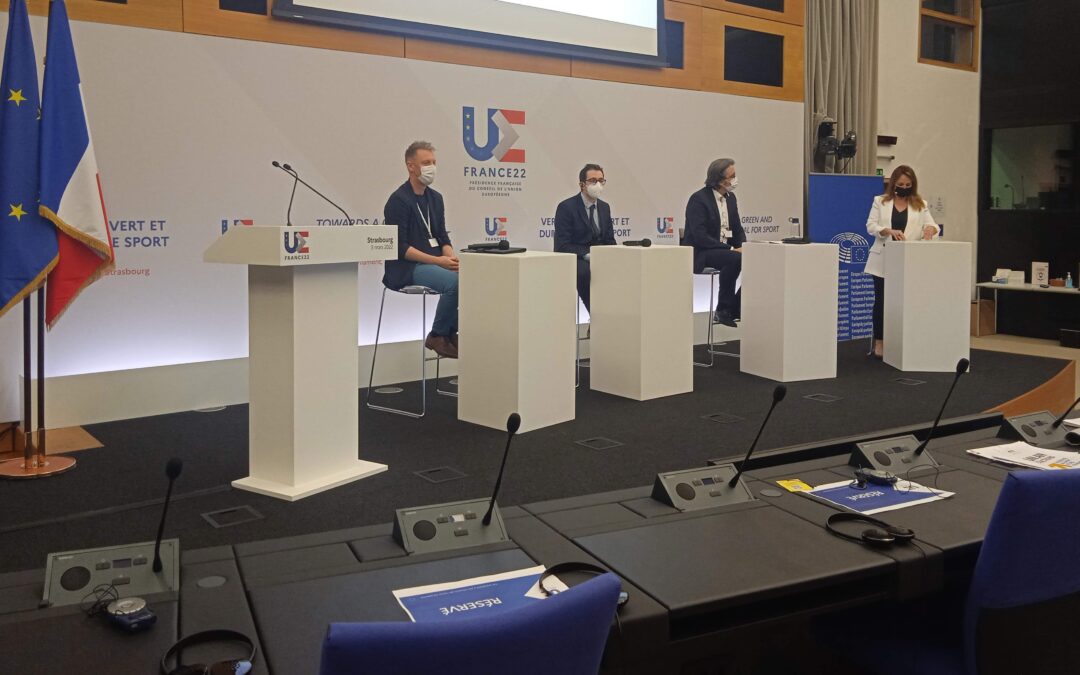 The conference “Towards a Green and Sustainable Deal for Sport”, organised by the French Ministry of Sport in the framework of the EUFP, was an opportunity to start discussions on the construction of a true European green deal for sport. All the guests present at the European Parliament in Strasbourg, whether they were institutional, NGO, Olympic committee or private sector representatives, sports or migration ministers, spoke in favour of this idea. Benjamin Billet, Secretary General of ENOS, also took the floor during the sixth round table of the day, contributing to the debate. Here is a detailed look at a conference that was full of learning and hope for cooperation.

Coming from the Czech Republic, Sweden and the European Commission, the ministers and commissioners invited to the conference announced their desire to cooperate by encouraging more partnerships within the sports sector.

Anders Ygeman, Swedish Minister for Integration and Migration, recalled that sport was one of the best ways to encourage mobility and increase interculturality, while the French Minister for Sport, Roxana Maracineanu, insisted on the need to recognise sport as a tool for education for sustainable development – taking up the results of the first meeting organised within the framework of the EUFP last February. Based on the latest GIEC report to underline the ecological urgency, she did not hesitate to consider sport as a cause, a victim but also a solution to climate change. It was in this context that she pleaded, like the other political figures present, for the implementation of a genuine European green deal for sport. In order to do this, it seemed necessary, during this conference, to define ambitious European perspectives, after having drawn up a precise inventory of the situation.

FIRST SESSION: THE TRANSVERSAL REGARDS ON SPORT AND ENVIRONMENT

1ST ROUND TABLE: THE IMPACT OF SPORT ON THE ENVIRONMENT AND BIODIVERSITY

In this sense, the first round table made it possible to clearly establish the link between sport and nature: it was agreed by all stakeholders that, although the sport sector is witnessing environmental degradation, it is also responsible for it. The representative of the International Union for Conservation of Nature (IUCN), Tim Badman, echoed Yann Leymarie’s comments, pointing out that nature sports can be consumed in an unsustainable manner (carbon footprint to reach the practice sites, non-respect of natural environments, etc.). Referring to the quantity of plastic used to produce certain sports equipment or the degradation of the environment caused by over-frequentation of spots, the head of sport at Surfrider Foundation Europe (SFE) stressed the negative impact of sport on the environment.

However, their findings are not totally alarmist as they recognise the positive role that sport can play on the environment. After listening to teacher-researcher Karim Abu Omar – who pointed out that walking and cycling are an effective way of reducing urban air pollution – Yann Leymarie insisted on the power of environmental education through sport, which is increasingly recognised within European organisations. This connection between sport and nature needs to be further recognised and collaboration between states needs to be further engaged so that the sport sector engages in a profound cultural transformation and contributes to addressing the global ecological crisis.

2ND ROUND TABLE: THE CONSEQUENCES OF CLIMATE CHANGE ON SPORT AND PHYSICAL ACTIVITY

This second round table, which focused on the adaptation of sportsmen and women to climate change, revealed the impact of the ecological crisis on the practice of sport (rising temperatures, transformation of previously unspoilt nature sports sites, questions about the use of artificial snow, saturation of natural areas, etc.) as well as on the organisation of major international sporting events (postponement or cancellation of competitions due to fires, typhoons, etc.).

Directly influenced by climate change, the speakers agreed that it was the duty of the sports sector to adopt eco-responsible behaviours (and in particular, to be less dependent on fossil fuels).

SECOND SESSION: INSPIRING IDEAS AND INITIATIVES FOR A GREENER AND SUSTAINABLE SPORT

The sports sector’s duty to become more eco-responsible includes a new management of major international sporting events. These events represent numerous challenges in terms of carbon footprint linked to the mobility of athletes, spectators, service providers, suppliers, etc. What solutions can be adopted to reduce the impact of these competitions?

While the existence of low-carbon labels – such as the one created by the Ministry of Ecological Transition – was congratulated, Kevin Rolland, a high-level skier who spoke at this third round table, argued in favour of setting up minimum sustainable development standards for the organisation of each major sporting competition.

In addition to major international events, the sports sector is also responsible for a large proportion of emissions, due to its polluting industry. This was the context in which representatives from Decathlon, Timberland, Picture Organic Clothing and the European Outdoor Group (EOG) met for the fourth round table of the conference.

The discussions were particularly interesting and brought out one main idea: we need to reinvent the way we produce, giving priority to quality over quantity and putting an end to the race for the lowest price. This should allow companies to focus on designing new types of products with a smaller ecological footprint, but also to set up a new type of economy giving the consumer the right to repair in order to avoid over-consumption and waste.

5TH ROUND TABLE: THE EVOLUTION OF SPORTS ACTIVITIES AND PRACTICES (TOURISM AND SPORT MOVEMENT)

On another scale, sports organisations at all levels can adapt to the climate crisis and push for more eco-responsibility in their field. Initiatives such as the CNOSF – the first Olympic committee to adopt an Agenda 21 including environmental measures – setting up a platform informing clubs on the steps to take in terms of ecology are, for example, a step in this direction. The underwater cleaners, who dive voluntarily into the Arcachon basin to collect waste, are also part of this approach. These are just some of the committed sportsmen and women who took part in the conference.

6TH ROUND TABLE: CONTINENTAL ACTIONS AND POLICIES FOR SUSTAINABLE AND ECO-RESPONSIBLE SPORT

More than just the sport sector, it is also the role of policy makers to encourage change. Asking them to rely “on the strength of nature sports citizens and their environmental awareness” to drive change, Benjamin Billet, Secretary General of ENOS, delivered a strong message at the end of the conference. In order to meet the requirements of the Green Deal – i.e. to reduce CO2 emissions and give Europe the means to prepare itself to invest in research and innovation – he pleaded for public decision-makers to be inspired by the most interesting European initiatives, whatever the sector. In the field of sport, the SEE project was highlighted as a good example of cooperation and collaboration on a European scale for rapid and concrete action on the environment.

CONCLUSION MADE BY THE FRENCH MINISTER OF SPORTS

An appeal heard by the French Minister of Sport, Roxana Maracineanu, who explained at the end of the discussions that she had heard the appeal of the various stakeholders and citizens, and recognised the need to support, more widely, the development of public sports policies at the environmental level.